Behind the Lines film of Sister Kate Maxey

Congratulations to all involved in creating the film Behind the Lines which features Edie’s closest colleague, Sister Kate Maxey, while they were working in Etretat in 1916. We were so pleased to attend the première in Spennymoor on 21st October 2018.

You can see the whole film on YouTube here. Do please spread the word. There’s also a short clip here by Mark Thorburn and Marie Gardiner of Lonely Tower Film and Media introducing the film.

Special thanks to John Banham of the Tudhoe & Spennymoor Local History Society for the following account (see below) of how the film came to be made.

See the page dedicated to Kate Maxey on Edie’s website here. You can also see all Edie’s mentions (32 in all) of ‘Maxey’ as she always calls her – never ‘Kate’ – here. 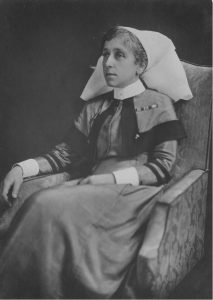 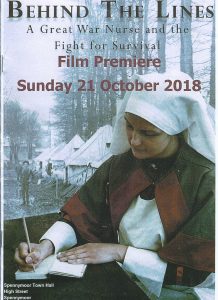 In May 1920 Sister Kate Maxey, a shopkeeper’s daughter from Spennymoor, was honoured as one of the first recipients of the International Red Cross’s Florence Nightingale Medal. She had served in casualty clearing stations and hospitals behind the Western Front for three and a half years before being wounded in a German air raid. To celebrate Sister Maxey’s service, and that of others from the town involved in medical services on the Western Front, Tudhoe & Spennymoor Local History Society, with the support of a £10,000 National Lottery Grant from the Heritage Lottery Fund, commissioned Lonely Tower Film and Media to make this film. The Society is deeply indebted to Kate Maxey’s family, who have made photographs and other records available, and to Dick Robinson, the great nephew of Kate’s nursing friend, Sister Edie Appleton, for his support for the film and for the readings from Edie’s diary so movingly read by his wife, Lisa.  The film has also been enhanced by support from many experts, notably Christine Hallett, Professor of Nursing History at the University of Huddersfield, whose accounts of nursing on the Western Front form one of the main elements of the narrative.

The Society see the film both as a commemoration of the 100 years since the end of the Great War and an insight into how communities were involved in medical services at the beginning of the twentieth century. It was most appropriate that the first showing was at Spennymoor Town Hall, which, then a new building, saw many of the local events associated with the war, particularly fund raising events for those serving and celebrations of homecomings and medals won. The Society is most grateful to Spennymoor Town Council for supporting the Premiere.

Film was in its infancy when the events celebrated in Behind the lines took place; but our forebears had plenty of opportunities in the town to see films and, I hope, would have appreciated the expertise and perseverance which Lonely Tower Film & Media have brought to this project. Mark and Marie said that the Kate Maxey story, which the Society put on the Durham at War website, was “filmworthy” and I hope that the wider YouTube audience agree.