Commemorating the Forgotten Women of WW1

I recently heard from Sue Boothby of Disley WI in Cheshire (https://cheshirewi.org.uk/disley/) about their wonderful project to commemorate the forgotten women of the First World War.  You can read all about it below and I have added some of the pictures of them working on the poppies which Sue sent me.   Please spread the word.

When Disley Women’s Institute member, Sue Boothby, learned that not a single poppy in the “Blood Swept Lands and Seas of Red” installation at the Tower of London in 2014 was in commemoration of a woman she set out to put things right.

Paul Cummins and Tom Piper’s display of 888,246 ceramic poppies was undeniably poignant and a fitting dedication to the fallen British and Colonial soldiers of the First World War. However, the number provided to them by the War Graves Commission excluded any female casualties.

Disley WI wanted to remember and commemorate these forgotten women and so set out to try to find out how many women lost their lives in service.

This was not an easy task. The Commonwealth War Graves Commission (CWGC) does maintain a database of casualties of the First World War. However, they acknowledged this could contain inaccuracies due to omissions in original information provided by the Military Authorities, or gaps as a result of computerisation and scanning of original texts. Their list also only included women who died whilst serving with, or attached to, a Commonwealth force.

This meant that women who died whilst working in a civilian capacity, such as ambulance drivers, munitions workers, spies, linguists etc, were not included. It was quickly realised the real number of female casualties will never be known.

Disley WI resolved to create a fitting memorial to commemorate these overlooked women. The CWGC were able to identify 818 individual women in the UK, and so members decided to craft a unique poppy for each named individual. An additional poppy was created for Edith Cavell, who made a significant contribution to saving the lives of soldiers from both sides but was not included on the CWGC list as she was in occupied Belgium in WW1. Finally, a special black poppy was made to commemorate all the civilian casualties that were not recorded. 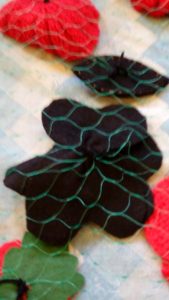 All 820 poppies will be on display at Disley’s Fountain Square on Sunday 11th November, with Disley’s annual Armistice Day Service taking place at the adjacent War Memorial at 11am.

Disley WI hope this will be a fitting commemoration to pay tribute to the sacrifices made by the women of WW1.

Next post: Behind the Lines film of Sister Kate Maxey