Another patient of Edie’s in Etretat has come to light and it’s an amazing story.  Here’s how it happened. The discovery was made in June 2019.

In anticipation of a talk which we are giving on 20th June 2019 at my old school, Tonbridge in Kent, I managed to get hold of a book published in 1923 which gave full details of all those former pupils and staff who died in WW1.  The book, Tonbridge School in the Great War of 1914-1919, provides full information on each of the 415 pupils and masters who died in action or died later from their wounds or diseases.

I checked through all 415; it was a lengthy but very poignant process as most were very young, including many who had only recently left school, and such a high proportion were killed in action on the battlefield. I was looking particularly for any who might have survived initially but died later in Casualty Clearing Stations or hospitals where Edie served and I found a dozen or so who possibly fitted that description.

Then I came across Captain Paul Hammond who was wounded by a bullet on 17 February 1916 and transported to No. 1 General Hospital in Etretat where he died just a week after suffering his injury. The name rang a bell for me: he was one of those 200+ names mentioned by Edie in her diary (see the full list here) and she was in Etretat at that time.  Here’s what she wrote on 18 April 1916:

April 18th. Maxey, Constable and I had half days.  Weather very heavy, blowing half a gale with occasional gusts of rain or hail. We walked to Benouville, dug up a basket full of primrose roots, then went to the Inn for our usual boiled eggs and bread and butter tea.  Then went home to the Cemetery and tidied up 9 graves, took away all the dead flowers and planted primroses. Col. Thackery, Capt. Hammond, Kerr and Sawden came under my special care.  If everybody does a few we may have them all tidy for Easter. The Cemetery is very beautifully kept.

So, Edie did care for Paul Hammond in his dying days. Over 100 years later these connections are still so powerful and moving.  Added to this was the inclusion, in the details about Capt Hammond (see below), of a quote from ‘The Nursing Sister’ which reads as follows:

“We were able to see what a splendid man he was in the very short time we had him with us. He was one of the most unselfish patients I have ever met. His one thought was for others and fear lest he should be disturbing them. The Sisters and Orderlies cannot say enough for his patience and thought for others, and could not do enough for him.”

The Nursing Sister isn’t named and I can’t be sure but I would love to believe that it was Edie writing that.  One more piece of information: Paul’s younger brother, Leonard, was killed in action just four months later on July 5th 1916, a double tragedy for the family.

In 2009 my wife, Lisa, and I visited Etretat and we followed the walk to Benouville which Edie mentions in her diary on 18 April 1916. You can see more about our walk, including a picture of the descendants of those primroses Edie mentions, here.

For full details about Capt. Paul Hammond on the Tonbridge School’s War Dead website click here. This is a copy of the information in the book Tonbridge School in the Great War of 1914-1919. For the complete list of all 415 who died click here; this allows you to browse for particular names

Meanwhile, here is a photograph of him: 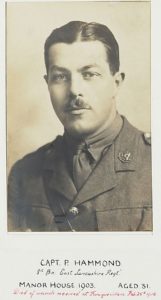 His Commonwealth War Graves Commission information can be seen here.