Jessie Hume CONGLETON; born 12 November 1872 in Newport, Fife; educated at Dundee High School, and trained as a nurse at Dundee Royal Infirmary between 1896 and 1899. Jessie Congleton was appointed as a Staff Nurse in Queen Alexandra’s Imperial Military Nursing Service in September 1906, and promoted to the rank of Nursing Sister in April 1914. She was awarded the Royal Red Cross, First Class, in June 1915, and was also mentioned in Army Orders in early 1916 ‘for conspicuous bravery during a fire at No.14 Stationary Hospital.’ 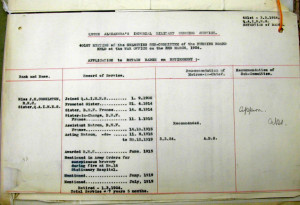 This is her Record of Service which shows both her award of the RRC and that she was mentioned in army orders for conspicuous bravery during a fire at No. 14 Stationary Hospital.  Click on the image to enlarge. 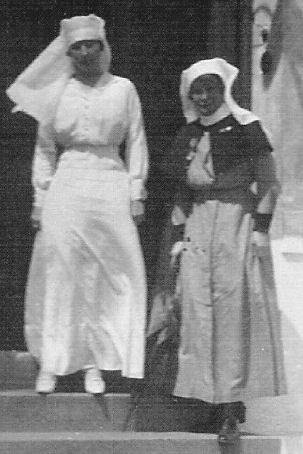 Here’s a photo of Matron Jessie Congleton (right) on the steps of No.32 Stationary Hospital, Wimereux (formerly the Australian Voluntary Hospital) together with Lady Murray.
This is taken from a larger image which Sue Light has kindly allowed me to ‘borrow’ from an item posted on her This Intrepid Band blog on 22 July 2013. Click here to view.

Sister Congleton, as she was when Edie writes about her, was clearly a close associate of Edie’s and one passage in the diaries which mentions her is one of the most telling and memorable. It can be seen on 31 July 1915 in Volume 2 Part 1. Here is the entry:

“Had the 1/2 day off duty, having evacuated 2 of my 6 cases. I called for Miss Congleton & took tea on to Mt Noir. Sat in a lonely spot overlooking Ypres — & had it. She got the R. R. C. for the Neuve Chappelle business & was telling me odd bits about it. The whole staff, Orderlies & all were worn out, the Mortuary Corporal included – one afternoon he came to Miss C. & asked her to help him “sort them out” & when she got there he threw off blanket after blanket from the poor dead things – who had been brought down in such numbers that some tickets were off. He said “Did you ever see ‘im before — & did you ever see ’im”. His one job was to sort out R.C.s — & Church of England – so that each Padre might bury his own. Then he found a fresh difficulty – over one – whom he thought was an Officer – but had nothing to mark him – “And ‘ow am I to bury ‘im – as a’ Officer – or man”. Sister said – “Surely they all get buried the same.” “No, they don’t.” said the bewildered Cpl. “Men is hammered – Officers is screwed.” Poor Sister who was worn out as well as every one else – suddenly went hysterical — & laughed & laughed — & the more she told herself it was tragic – not funny – the funnier it all looked — & the little white faced corporal with hair on end just gazed helplessly at her — & everything. That is one of the truest pictures of over work & under sleep — & perhaps it shocks you – but I have lived through much the same — & it is dead true.”

Update 22 November 2011: Ann Etheridge in the USA, who is a collector of mourning jewellery, photography, and ephemera, as well as a historic researcher, has been in touch to share a letter she has which records Jessie Congleton’s death in Gibraltar in April 1932. The letter was written by Alice Congleton to her cousin Emily Hume in Allentown, Pennsylvania. You can see it here. There are three images showing four pages of the letter and one showing the envelope.