Click here to read about, and view, the wonderful film, Behind the Lines, about Sister Kate Maxey by Lonely Tower Film and Media and premièred in Spennymoor on 21 October 2018.

You can also see all the many mentions of Sister Kate Maxey (always ‘Maxey’, never ‘Kate’!) which Edie makes in her diaries here.

John Banham’s pages about Kate Maxey (see Update 21 April 2016 below) have now been updated with more fascinating information.  At the time of writing this I can’t see that the Durham at War website has made the update yet but you can see the new version here.  Thanks for your hard work, John.

If anyone reading this can throw more light on the images or faces which appear in the link above do let us know (ediesdiaries@gmail.com).

The Durham at War website now has lots more photographs and information about Kate Maxey’s time in France. It has been prepared by John Banham in support of the Somme 1916 Exhibition – From Durham to the Western Front.  You can see it here.  Many wonderful images.

We gave our Edie presentation in Durham on 15 March and were delighted to see no less than five relations of Kate Maxey there: great nieces, Maureen, Barbara and Elizabeth and great nephews Christopher and Richard.  Here we are in the very grand Council Chamber at County Hall. Click on images to enlarge. 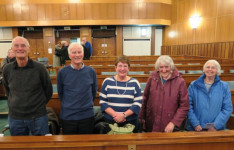 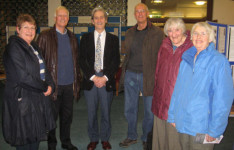 The Durham at War website now has a special feature on Sister Kate Maxey with a lot of information and photos; you can see it at www.durhamatwar.org.uk/story/11260/.

Have a look, too, at these two pages:

Special thanks for the above to John Banham and colleagues at the Durham County Record Office.

One of Edie’s closest friends working alongside her in France was Kate Maxey whom she mentions many times in her diary, always as ‘Maxey’, never as ‘Kate’. They were together at Etretat for most of 1916 and may have been later than this but sadly the diaries are missing from the period mid-November 1916 until June 1918. It is clear that Edie and Kate shared many off-duty hours together going for walks, collecting flowers for the wards and some more exotic adventures. See the names index for dates on which she is mentioned in Edie’s diaries.

Do have a look, too, at the very comprehensive page we have created on Etretat; it has lots of information and photos of the town as Edie and Kate would have known it and as it is in the 21st century.

In August 2011, when this page was first published, we said that we were particularly keen to trace any relatives of Kate. Just a month later, in September 2011, we heard from two of Kate’s great nieces who had lots of information about Kate. In October Dick Robinson (Edie’s great nephew) visited them in County Durham and this page was subsequently updated. December 2011 – see update below. 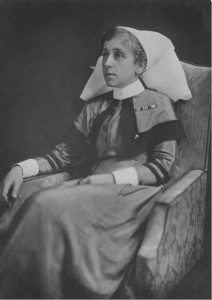 Here’s picture of her, probably taken after the war.
Click on the image to enlarge.

Kate was born in Spennymoor, County Durham in 1877, the daughter of Walter John Maxey and his wife Jane (née Watford). It seems that Walter was married twice, both wives being called Jane. She had siblings Martha, John, Mary and Amelia, and by 1891 Kate and Amelia, the two youngest, were living in Leeds with George and Catharine McKane, their relationship being given as ‘Niece’.

One of Kate’s sisters, Amelia Jane Maxey married James Large in the September quarter of 1906 (July, Aug, Sept) in Leeds. At some point they lived at Burn House, Spennymoor.

Kate Maxey trained as a nurse at Leeds General Infirmary and served throughout the war until she was wounded at the time of the German Spring Offensive in March 1918. She was one of the Great War’s most decorated nurses, being awarded both the Royal Red Cross, 1st Class, and the Military Medal for bravery under fire.

Here is more information about her decorations:

His Majesty the KING has been pleased to approve of the award of the Military Medal to the undermentioned Ladies for distinguished services in the Field as recorded:—

For gallantry and conspicuous devotion to duty displayed during a recent hostile bombing raid on a Casualty Clearing Station. Although severely wounded herself, she went to the aid of another Sister, who was fatally wounded, and did all she could for her. Later, although suffering severe pain, she showed an example of pluck and endurance which was inspiring to all.

Kate Maxey nearly lost her life as well that night. Her injuries were reported as:

‘… she sustained multiple bomb wounds in the following regions. Right forehead, right side of neck, right forearm, right thigh upper and lower, left thigh and right foot. The lower part of the right radius was fractured. The right spinal accessory nerve was injured causing pain and limitation of movement of the scapula. The right membrana tympani was perforated.’

A report from the Officer Commanding 58 Casualty Clearing Station concluded:

‘… Miss Maxey’s tact, zeal for work, and influence for good are of the highest. On the night of 21.3.18 when lying wounded, she still directed nurses, orderlies and stretcher bearers and refused aid until others were seen to first. I have the greatest pleasure in giving this testimony to one of the finest Nursing Sisters I have ever met.’

Kate Maxey returned to work on 8th August 1918, and continued to serve in the Territorial Force Nursing Service until April 1931.

There’s an intriguing entry (spelling corrected), taken from the British Journal of Nursing on this page:

Miss Kate Maxey, who gained the Military Medal, the Red Cross Medal, and the Mons Ribbon, has been presented with a silver set of salts and spoons, in recognition of her heroic work in France, by the Spennymoor Ambulance Brigade and Nursing Division. She was wounded by hostile aircraft when in charge of a hospital in France.

On 8 June 1918 Kate Maxey wrote to Sidney Browne (female) the Matron in Chief of the Territorial Force Nursing Service (TFNS):

May I have the honour to congratulate you upon your name appearing in the list of Dames Grand Cross.

I enclose papers with date of Gazette of Decorations.

If my friend Sister E. E. Appleton Q.A. Reserve who was mentioned in the New Year’s list of R.R.C.s , and is at present on leave in U.K. is receiving her decoration, may we, if possible, receive them on the same date.

I have, Madam The honour to be Your obedient servant

What a delightful thought: Edie and Kate going off together to collect their decorations! However, Sue Light reports: “we do know that her Investiture was not on the same day as Edie’s – Kate’s was on the 22 June 1918, while Edie waited until the 11th June 1920”. Shame – I expect they were as disappointed as we are. Click here to see the register of Edie’s decoration at Buckingham Palace by the King.

Here are census returns showing the Maxey family at 30 Clyde Terrace, Spennymoor in 1881 and just Kate and older sister Amelia, as nieces in the home of George and Catherine McKane, at 55a North Street, Leeds in 1891. 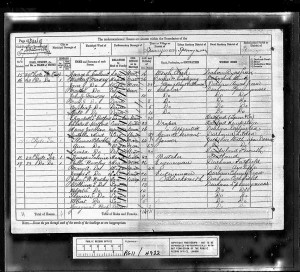 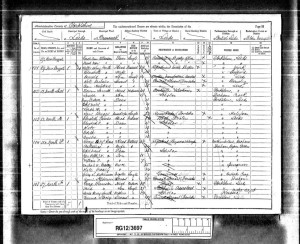 In 1901 Kate was a nurse at Leeds General Infirmary.

In October 2011 I travelled from Gloucestershire to visit three great nieces of Kate Maxey in County Durham. While researching family history they had come across references to their great auntie Katie on Edie’s website and they had then used Edie’s Visitors’ Book to get in touch.

I received a very warm welcome from Elizabeth Varley and her husband Brian and, later, from Maureen Defty and her sister Barbara and it was a most rewarding visit. We spent several hours sharing information about our great aunts who were clearly close friends as well as colleagues while working in Etretat. Such contacts, made almost 100 years after our relatives, Edie and Katie, knew each other are very powerful and precious.

Here they are. Maureen and her sister, Barbara, whom I photographed during the visit and their cousin, Elizabeth Maxey Varley, whose picture I have ‘borrowed’ from the internet as I forgot to take a snap of her! 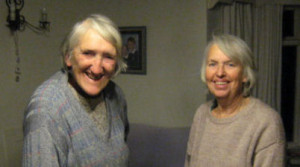 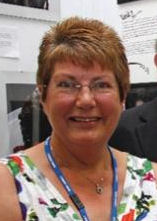