Here is another remarkable example of the death of a soldier in Edie’s care, and mentioned in her diaries, being spotted by a descendent 90 years later.

Karen Hrabec added this message to the Visitors Book on 21 November 2008:

I have been doing some family research and came across Edith Appleton diaries. In Volume 4 (21 June to 27th December 1918.) on August 22 1918 she quotes she had been nursing a spine case who died on the 21 August. Also says his wife was with him. This is my great grandma May and great grandfather Sgt James Partlin. She also stated that all of Accrington would know.

I have the paper cutting from this event stating my great grandfather had died. Accrington Observer and Times September 1918. It shows a photo of him. But I do not have a photo of my great grandma, so will never know what she looked like. 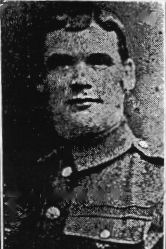 Photo of Sergeant James E Partlin from the Accrington Observer and Times of Saturday 21 September 1918. This is a a photocopy and not the best quality. I am hoping to get a better copy direct from the paper at some point. 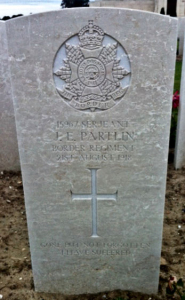 Sergeant Partlin’s grave in the Mont Huon Military Cemetery, Le Treport. Taken by Sara Robinson on a visit in August 2012.

At this stage Edie was at stationed at No 3 General Hospital in Le Tréport. Her diary for the date mentioned says this:

Aug 22nd. St. Bartholomew’s Day. I wonder if the children will get their buns – don’t suppose there will be many plums in them – if any, but it is the bun – that is the joy. One spine case died yesterday. His wife was with him. Dear simple soul – it was very pathetic, & she suffered untold anguish but Grief is strange – the heart enveloped in it is constantly finding little peepholes of comfort, & occasions for rejoicing. The poor thing would weep that she was losing a good husband, then: “but his Colonel was proud of him, & is going to write to me, and then it’ll all be in the paper!” Then she would be sorry again – & then – “All Accrington will know of him – it’ll all be in the papers” [-] “Ah well – I’m glad I’ve seen the last of him – I shall be more content.” He – Sgt. Partlin, was only 35, I thought from looking at him he was about 50. War does age them.

By googling I found several mentions for Sgt James Partlin, including this entry for him on this page of the Accrington Pals website.

…and his grave is recorded on the Commonwealth War Graves Commission website here.

I have since been in touch with Karen and she has sent this entry from an Accrington paper of the time:

FOR KING AND COUNTRY.

News has reached Mrs Partlin who along with her five children lives at 16 Croft St Accrington, that her husband Serg J Partlin has been killed in action. Deceased who had been in the army for nearly four years, was in the Border Regiment and before enlisting was employed at the Accrington brickyard. He attended St Ann’s church where his name is on the roll of honour.

Mrs Partlin has received the following letter from her husband’s commanding officer.

‘I regret I haven’t written to you about your husband before this date, but since my last letter I have had to have a small operation, which has confined me to hospital. It appears that your husband had only joined the Battalion a few weeks before he was mortally wounded, but during that time his company officers speak most highly of his work. Full of energy and a keen footballer, he was of a bright disposition. Which so helps a leader to inspire confidence in his subordinates. I feel sure that if your husband had not been hit so soon in this tremendous battle which had been going on on the Western Front, he would have proved himself one of the most gallant N.C.O.s in the regiment.

He died doing his duty, a man to be proud of.

Karen added “May and James had five children: 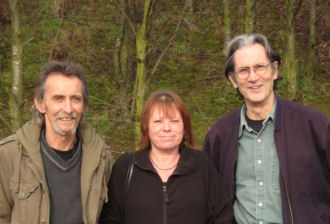 Update: 8 January 2009. Karen has provided information about Patrick Gerald Mulrooney who married May Partlin in 1919 and about his son by a previous marriage, Patrick James Mulrooney, who had a relationship with Mary Partlin (Karen’s grandma) and produced her mother. For information about the Mulrooneys, click here.

Two things strike me about this episode in the dairies. First, I notice Edie’s tendency to be blunt in her description but I attribute it to the time and place, not unkindness. War invokes harsh judgements by those on the scene.

Second, I am struck by how brave those relatives must have been to travel from home in the UK, across the English Channel where ships were being sunk by enemy action, to be with a dying relative. I gather such journeys were not unusual but how courageous must May Partlin have been; presumably she left her 5 children in the care of a relative to cross the channel to be with her husband during his last days.

If anyone is able to provide further information – about Sgt Partlin or about any other named person in Edie’s diaries – we would be glad to hear from you; please get in touch via the Visitor’s Book.