The Great War – An Elegy – Reviews

There’s been some great feedback about the BBC programme; some of it about the way the film was made, including some very positive reviews, as well as some personal comments.

Someone emailed:
“What an excellent programme. You and the other contributors gave Simon Armitage such sharp details about your family members in WW1 that his poems just seemed to grow out of the stories, with no added rhetoric or sentiment. The poetry is in the pity, said Wilfred Owen.  It was all beautifully put together and riveting.”

For a longer and very thoughtful account read Gerry’s How the Light Gets In blog.  It is here and includes links both to the BBC iPlayer page as well as to the whole programme on YouTube. 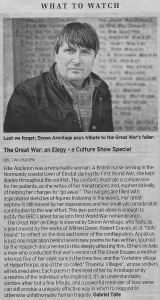 A A Gill wrote the following in The Times.  It was part of an article entitled The BBC’s war effort goes over the top and,as you will read below, his comments on The Great War: An Elegy included the comment that it was “by far the best memorial programme of the week”.  Who would disagree?

I’ve already posted about the FT’s excellent preview; reminder that you can read it here.

A heartfelt thank you from me to Simon and to the director/producer Zoë Silver and her crew.  I was so pleased to be asked to contribute and the process of making the Edie section in Etretat was a delight – never mind those cold winds off the sea!

Next post: How come Michael Morpurgo wrote the Foreword?

Previous post: The Great War – An Elegy on iPlayer