There were a number of newspaper cuttings and some handwritten poems loose amongst the pages of Edie’s diaries.  It’s not easy to date the cuttings or to identify the authors of all the poems.  If anyone is able to provide further information I would be glad to hear from you; please get in touch via the Visitor’s Book.

UPDATE 2 October 2014:  It’s National Poetry Day (see http://www.poetrysociety.org.uk/content/info/npd/) so take the opportunity to look at the poems found amongst Edie’s diaries; see below, starting with those by Private Cooper.    Take a look, too, at the rather wonderful poem ‘Sister’ (next link below) which was sent to me recently.

First the poems and here are three by, I think, the same person: J. Cooper, 2824, A Company, 1/8 Royal Warwicks. His name appears at the bottom of the third poem and is dedicated ‘To Sister Appleton From a grateful patient’. The handwriting is similar on all three but it’s possible that J.Cooper wrote only ‘The Sausage’ and that the other two (‘England’ and ‘Day Dreams’) are by someone else. If you can put dates to these that would be excellent. 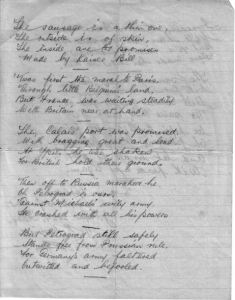 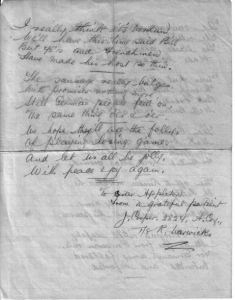 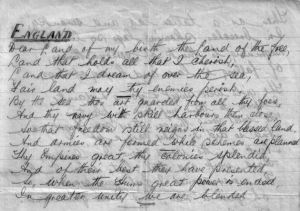 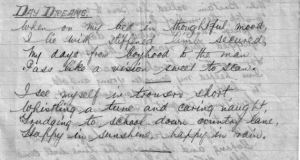 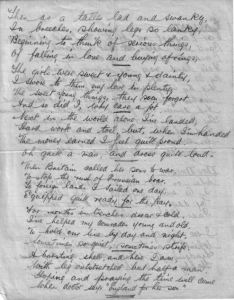 This fourth poem is from Private D.J.Dennis, 7213, C Company, 6th Buffs and has ‘No. 1 Annex D General Hospital B.E.F. France added after his name. Edie was at No. 1 General Hospital from November 1915 and Volume 3 of her diary still has her there until 15 November 1916 but we are then unsure of her whereabouts until Volume 4 when she is at Abbeville.

There’s a slightly exasperated comment about the subjects of this poem from Edie on 6 July 1916 – in Volume 3 of the diaries:  “Unpleasant insect companions are the terror of my life.  Many came down with the Tommies – & some have transferred their affections to us. & we hadn’t a quarter of a second to hunt them so just forgot all about them until bed time which came late.”

If anyone can shed more light on these poems or on their author, please get in touch via the Visitor’s Book.

Pilgrims of the Night 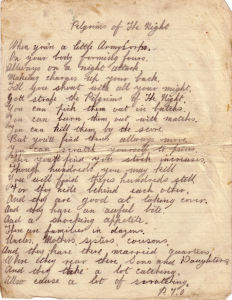 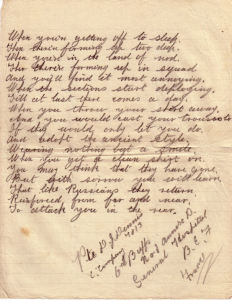 Now, here are the newspaper cuttings. Any information on dates or the subjects of these cuttings will be appreciated. Get in touch via the Visitor’s Book.

The cutting on the left below was loose in the pages of Edie’s diaries. This cutting may well relate to the diary entries for 17 and 20 September 1915. See Volume 2, Part 1.

Jayne Hyslop has very kindly provided the cutting on the right from The Toronto Star of 12 June 1917. More information here: http://www.canadaveteranshallofvalour.com/Bell-IrvingMM.htm 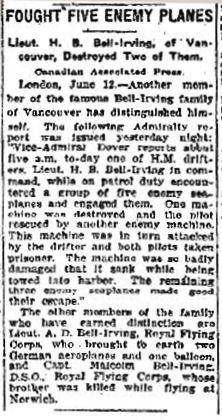 A modern eye will probably make a connection between the next two newspaper cuttings.
The one on the left may relate to Edie’s entry about a concert she attended on 15 November 1915; it’s in Volume 2, Part 1.
The one on the right is not linked to any particular date.

This next cutting bears no date or place but is an image which must have been repeated many, many times. 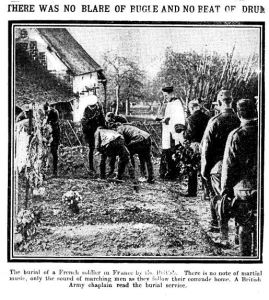 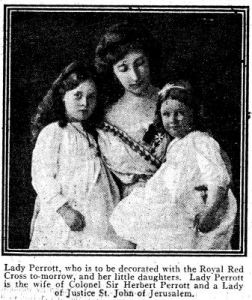 Finally, an undated cutting about Lady Perrott on the left and, below, a cutting from The Times of 6 July 1939 announcing her death and providing information about her.

The National Gallery holds several portraits of her (click here to view) and more information about her can be found online.

Thanks to Jayne Hyslop for providing the obituary notice. 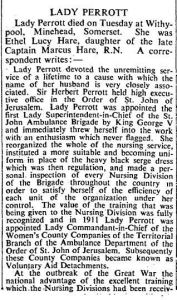 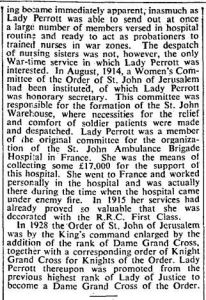