It was such a nice surprise to come across this picture recently.  Julia Barrett had been inspired by Edie’s diaries to create a replica of the costume she would have worn. 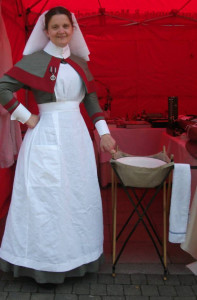 You can see lots more photos of how Julia created the whole costume – right from the first scraps of material and initial stitches – click here.

And here are some comments from Julia:

“Edie has been my inspiration since I first came across her diaries over a year and a half ago – they (and she) are amazing. As well as a costume maker, I am also a historical interpreter and have used the uniform and Edie’s diaries to try to portray some element of the lives of those quite extra-ordinary women who gave so much for the care of our troops.

“I saw your website last year when I was rummaging around for more on Edie.  Edie Appleton holds a particular fascination for me for a number of reasons – as an ex reserves officer and having trained as a midwife later than average, I lived for some years in Hampshire during which time I travelled around the Isle of Wight, including a good old nose around Brighstone – long before I’d even heard of Edie! I am also in Ipswich, so spotting Edie’s concern for her mother living in Bury St Edmunds (20 miles away), was really exciting!

“I simply adore the way she writes, juxtaposing the horrors of the shelling with the beauty of a sunset or a bird singing. I hope my interpretation of her uniform does her justice.”

Thanks Julia – you did a beautiful job!