The development of the script and production has been made possible thanks to a Grants for the Arts Award from Arts Council England.

Very exciting three days of R&D this week at the Royal & Derngate theatre in Northampton for Edie – the Play (aka ‘Edie’s War’ – working title)  scheduled for 2016. We are hoping this will be an immersive play for family audiences including older children. 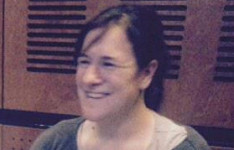 The writer, Morgan Lloyd Malcolm (@mogster), has already written some short pieces for us to experiment with; she’s done a wonderful job in capturing the essence of Edie’s character and of the material in her diaries. 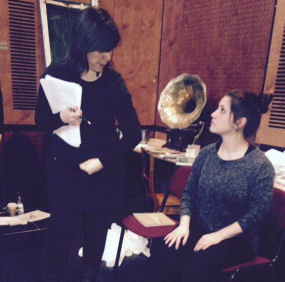 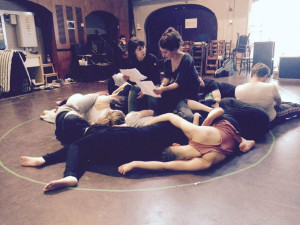 Jenni and Kate amongst the wounded

Providing expert advice on the role and lives of WW1 nurses was Professor Alison Fell who looks after the Legacies of War project at the University of Leeds (http://arts.leeds.ac.uk/legaciesofwar/).

Students from Dani’s acting course at Northampton University were also present for part of the sessions to experiment with the immersive aspects of the play and representatives of the participating theatres (Royal Exchange in Manchester and Royal and Derngate) are joining for the final sessions on Friday.

So – loads of talented people brought together to begin to build what is going to be something very special: a play about WW1 from the perspective of a woman who was deeply involved – and at times in grave danger – throughout that terrible conflict.

Oh, and I was there as the Keeper of the Diaries and General Know-All about my great aunt Edie!

Venues are yet to be decided but may be in a very large tent. Watch this space.