In April 2009 Piers Stainforth (great nephew of Edie) was rummaging through family archives and found three early letters from Edie to her mother.  These three, which were all in one envelope, are a wonderful addition to the diaries and fill some of the gap between the time that she first set off for Belgium and France in October 1914 and Volume 1 of the diaries. 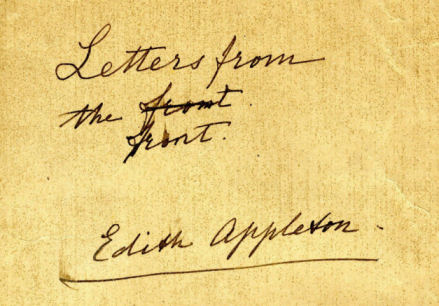 “I found three letters in an envelope among papers left by my father. The envelope is informed in a hand unknown to me, “Letters from the front. Edith Appleton”. Too bad it contained only three! Two of the letters are typed transcriptions which were, I suppose, done some time after the event. One of the two transcriptions (11.10.1914) is a carbon copy, includes a title page and is pinned together by a neat brass tack at the corner.

“The other (9.12.1914) appears to be an original typescript, including a couple of postscripts, at least one of which was apparently added later as the quality of the ribbon and the alignment of the text differs significantly from the rest of the text. All of the work we’ve seen from Edie was hand written and I think it unlikely that she had access to a typewriter usually — though this letter is from a “Stationary Hospital” which may have included such things — or that she would seek one out instead of writing by hand as usual. Anyway, want of access to typewriters and Edie’s more typical use of pens to write and draw, and the concern she expressed in a diary when a pen was lost, suggest to me that these typescripts were done some time later, perhaps at the time that someone began to transcribe the diaries (Volumes 2-4 remained as handwritten by Edie) by typewriter.”

The letter, which comprises four typed pages plus a covering page entitled ‘A LETTER FROM FOREIGN WATERS. Written by Edith E. Appleton’, details the journey she made by ship from Southampton via various other ports (Dungeness, Dover, Ostende and Dunkirk)  and ending in Boulogne.

This letter is sent from No 10 Stationary Hospital which was based at St Omer from October 1914 until May 1918. The letter starts by saying that a recent letter from Edie’s mother had taken longer to arrive as it had been addressed to her at No. 14 Stationary Hospital which records show (http://www.1914-1918.net/hospitals.htm) was based at Wimereux between October 1914 and April 1919. This suggests that Edie had recently moved from No. 14 to No. 10 Stationary Hospital so, together with the information in the first letter above, this all makes her service record details look a bit minimal.

Update 6 February 2012: an email from Bern in Australia has included some very useful links concerning No. 10 Stationary Hospital in St Omer.  He says: “the building that houses 10 S.H. (although there were also wards in the adjoining church/chapel and it’s possible other buildings in that street were used too) can be seen at http://throughtheselines.com.au/research/saint-omer#10SH. Photos here: http://www.flickr.com/photos/thrutheselines/sets/72157629165440251/detail/. Thanks Bern.

For family members (see the family tree here), one of the delights of this letter is its mention of several of Edie’s relatives and a close friend: 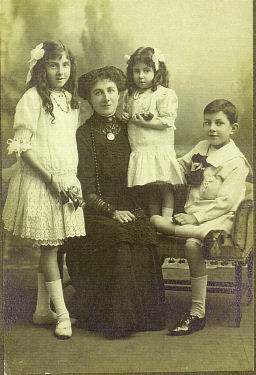 Here is a picture, dated 1910 so taken just 4 years before Edie’s letter, of Amy Adelaide Victoria Appleton (née White) and her three children, Olive (10), Dorothy (2) and their brother Edward Rowland (8).

If the photos was taken in 1910 those ages should be about right although I would say the children all look a bit older.
Many thanks to the family of Dorothy for the photo. 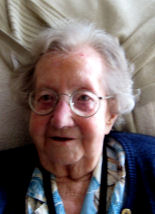 …and here is a photo of Dorothy West (née Appleton), who celebrated her 101st birthday in January 2009. This photo was taken in early May 2009 when I visited Dorothy at Westall House, Horsted Keynes.

Sadly, Dorothy died on 12 September 2009.  Since I first made contact with her in 1996 she has been a wonderful source of stories and information about the Appleton family in the first half of the 20th century.  Thank you, Dorothy. 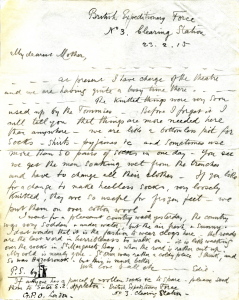 By this time Edie was at No 3 Casualty Clearing Station.

This CCS, the records show, began at Hazebrouck in August 1914, moved to Poperinghe in April 1915 and, a month later under fire, moved to Bailleul.

This move is dramatically described in Volume 1 of Edie’s diaries.

Taking together all the references to locations in these letters and some in the later diaries, it seems that we need to revise or, at least, expand the sketchy information in Edie’s service record. Here it is: 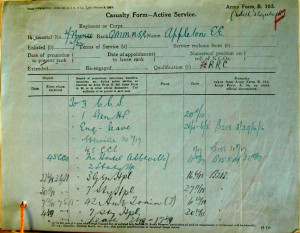 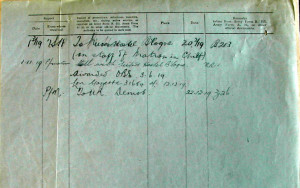 The Service Record shows no date of joining up  and the note ‘To 3 CCS’ is undated. The first date mentioned is 20 November 1915 to No. 1 General Hospital but, with the help of the new information in these letters as well as information received from Sue Light (expert on the role of nurses in WW1 – see (http://scarletfinders.co.uk/), we can state the following: