When I originally wrote this page (in September 2011 – see below) I expressed the hope that a descendant of Ellen Baldrey might get in touch so we could “bury the hatchet” over the incident which Edie descibed in her diary entry for 14 July 1918.  Here’s what Edie wrote then:

“I had a strong feeling all along that I had been sent in disgrace from Abbeville – it was so sudden and unexpected. I heard – on Friday – that it was the Matron of the Home – who had me ejected – she told Miss McCarthy that I influenced the Staff – so that she could do nothing with them. The truth is – that she tried to boss me & run the hospital when I was in charge. I would not have that – & told her so – After all – when I am in charge it is quite sufficient for me to boss the staff. She hated me for not allowing her to – & so got me thrown out! The dirty dog! Being in disgrace does not sit heavy on my chest……”

In April 2013 her great great niece, Janice Kennady (née Stone), emailed me out of the blue and I now have photos and other information about Ellen Baldrey.

The first picture of Ellen Baldrey is undated but I am guessing that it would have been taken after the First World War. Click on the thumbnails to enlarge images. 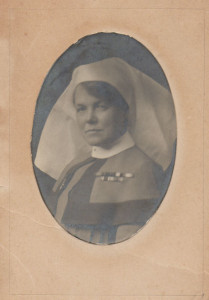 Miss Baldrey’s name appears just below that of Edie on the Register of Persons on whom the Decoration of Royal Red Red Cross was conferred. This can be seen on our page about Edie’s medals – click here.

It would be good to hear from any of Ellen Baldrey’s family. The reason is this. If you read Edie’s dairy for 14 July 1918 you will see that she felt she had reason to feel aggrieved about her treatment by Miss Baldrey. This must have been heartfelt as Edie was not in the habit of criticising her colleagues unnecessarily. The passage reveals strong feelings but almost 100 years later perhaps our families can meet and bury the hatchet!

If you are a descendant or have more information about this colleague of Edie’s we would like to hear from you.  Please use the Visitor’s Book.