The following information is kindly provided by Sue Rangeley who put it together for an exhibition in Nora’s home town of Charlbury, Oxfordshire for a WW1 exhibition in 2014.

“Nora (Norah) Constable enlisted on December 2nd 1914; the National Archives records have a signed document by Nora and Annie McIntock, who was the Matron of St. Bartholomew’s Hospital (1910-1927).” 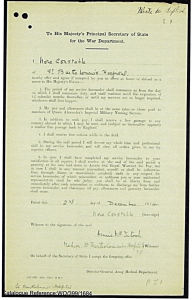 “She probably arrived in France in January 1915, and went to Casualty Clearing Station No. 8 at Bailleul. Nora would have nursed the British casualties of the gas attack on Hill 60, near Ypres, as they received treatment at C.C.S. No. 8. She worked there until November 1915.

“Edith Appleton, whose poignant diaries record her own military service service, was working in Bailleul, at No.3 C.C.S. On November 16th 1915, her diary entry records ‘Constable’, herself, and other nurses, leaving Bailleul to go to General Hospital No.1, Etretat. Edith’s diaries record another 10 entries of her colleague ‘Constable’; during their time at Etretat (see quotes). Nora worked at the Etretat hospital for all of 1916.

Here are two pages from her Service Record: 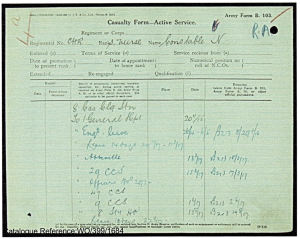 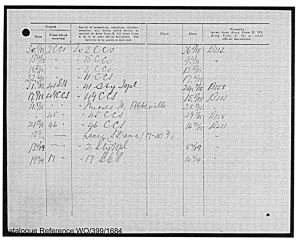 “In January 1921, Nora Constable returned to Cologne to marry John Edward O’Loghlen, on January 19th 1921. Her marriage certificate records the ceremony ‘within the British Lines at Cologne’. Nora had possibly met John while working in a hospital; he was a physician, who enlisted on February 20th 1915 as a Lieutenant in the R.A.M.C.

“A fascinating story of a WW1 Nurse who was born in Charlbury. ” 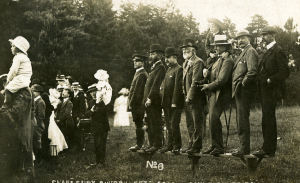 Sadly, we have no photograph of Nora Constable.  But here is a photograph of her father, aged 48 ( he is third from the left standing on the bench). Thomas Constable is listed as the hotel keeper at The Bell Hotel, 5 Church Street, Charlbury in the 1891 census. , Nora was then 4 years old. Her mother was Fanny and she had a sister Maud  aged 6, brother Thomas 7, and younger brother Frederick (2), who fought in WW1; he served as a Lieutenant in the 15th (the Kings) Hussars.

The 1911 Census has Nora as a Hospital Nurse at St Barts and here is a photo of one of the wards around that time: 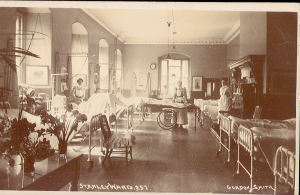 Here’s another pre-WW1 photo of the courtyard outside Barts Hospital.  What a dapper lot! 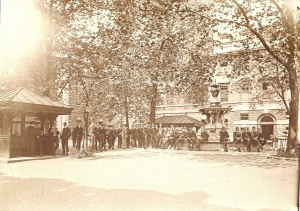 Here are the relevant dates in three of the diary volumes when Edie makes references to her colleague, always referred to in the formal way of that time as ‘Constable’: