Olive Adelaide Swanzy, (1881-1974), was the daughter of the Reverend Thomas Biddall Swanzy, (Church of Ireland), of Newry, Northern Ireland. The Swanzy family, originally from Lancashire, had been in Ireland since the 1600s. Her three brothers all became priests. The 1911 census shows Olive as living with her mother, Elizabeth, and a cousin, in Newry. Her father had died when she was an infant. Olive was born in Cannes, France. She never married and continued nursing when she returned from the Western Front. She became the Matron of Newry Hospital, where she served throughout WWII. She was prominent in the local St John’s Ambulance Brigade and taught at Sunday School. 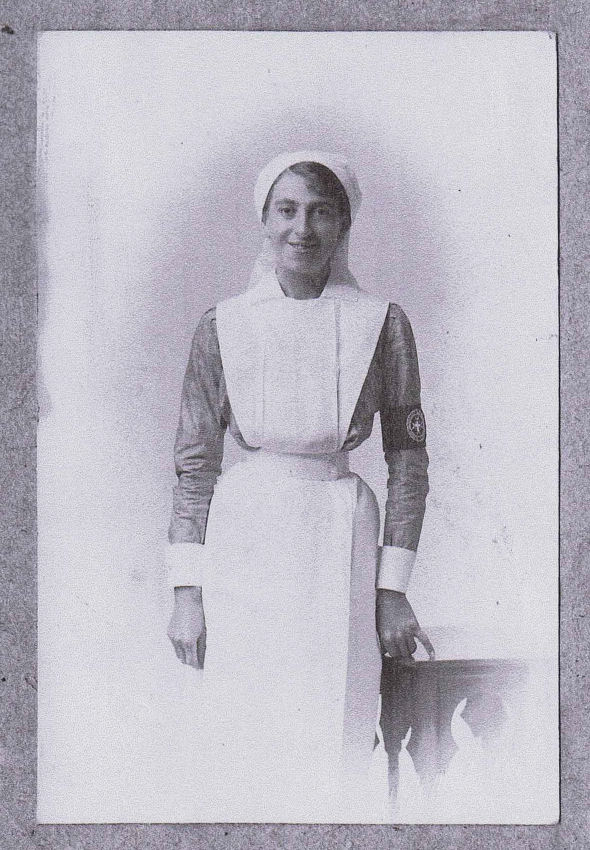 Here she is wearing the uniform of a St. John VAD.
Click on the image to enlarge. 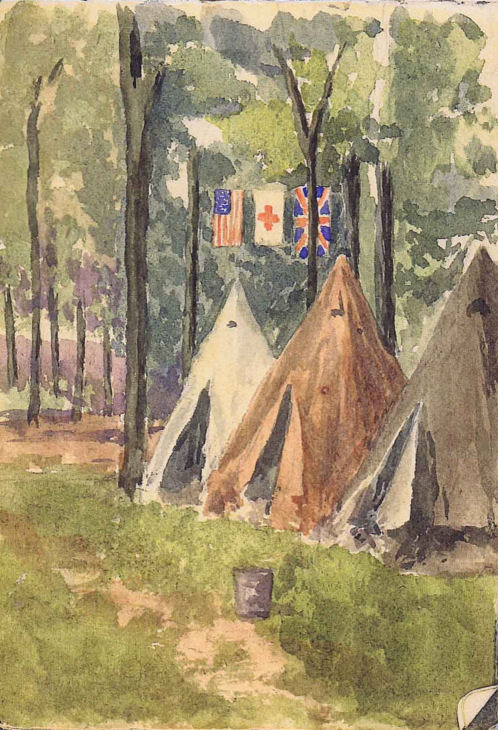 A proficient water-colourist, she painted several scenes of the tented accommodation that the nurses lived in during their service in France. The accompanying illustration is one of these views, painted while she served at General Hospital No 12, which was sited on the racetrack outside Rouen, in France. At her funeral service, the priest said: “When I think of Olive Swanzy I am reminded of the saying that saints are not people who do extraordinary things but people who do ordinary things extraordinarily well.”

The above information was kindly provided by television producer, David Boardman. If anyone else has information we can add to this page, particularly if you are a relative of Olive’s, please get in touch by email at ediesdiaries@gmail.com or by leaving a message in Edie’s Visitors Book.

“Yesterday I had the day off and thoroughly enjoyed it. My kind people sent up breakfast from the ward; then until 10 o’clock I chiefly slept – it was too cold to put as much as a nose out of bed. Then I got up and Swanzy and I went to the Casino to lunch and after joined several folk who had the half day off. We walked through the Tank Camp to Bois de Cire. It was a frosty afternoon with golden sunshine and the autumn tints showed up to perfection. We went to a quaint little Hotel for tea which is kept by a charming old man and his wife. They are rather a picturesque couple – he played the gramophone to us while she prepared tea. It was quite dark before we left and no moon and no lights made it a bit difficult to find the way but we did all right and got home soon after 7 o’clock. Early to bed and slept like a log.”

The London Gazette of 14 January 1964 lists Olive Swanzy amongst those awarded The Most Venerable Order of the Hospital of St. John of Jerusalem. Information about the Order is available here and here.

Click here for a compilation of all Edie’s references in her diaries to VADs.