The death of Rifleman James Lennox

In September 2008 I came across this mention of Edie’s diaries.

Sue Light (see scarletfinders.co.uk and greatwarnurses.blogspot.com) contacted the Saoirse32 blog to tell them she had….

“made a link between Edie’s account of the dying days of Rifleman James Lennox, from Edward Street, in the Harryville area of Ballymena, who was severely wounded on July 1, 1916. His wounds were mortal and he passed away, after weeks of stoic suffering on August 22.”

“Few men are named in the diary, but there are occasions where the man can be identified. During July and August 1916, she (Nurse Appleton) nurses a young man who everyone knew was without hope, but somehow clung to life for weeks. Although not identified at first, he is later named as ‘Lennox’ and by his date of death, I could eventually pin him down as:-

“The account of his final days is very touching and I thought this link might be of interest to someone in your town – it is so rare to have this sort of descriptive writing of an ordinary soldier. The entries regarding James Lennox begin on July 13th 1916. The diary entry for August 23, 1916 makes particularly emotional reading.”

August 23rd. Lennox died soon after 8 o’c last night. Never have I seen such a slow painful death. It was as if the boy was chained to Earth for punishment. Towards the end it was agony for him to draw the little gasp breaths – & I felt I must clap my hand over nose & mouth – & quench the flickering flame. I am very glad for the boy to be away. 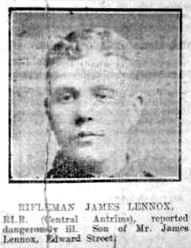 Here is a picture of Rifleman Lennox which I found on a website here. [The photo is no longer on that page]

I have read Edie’s account of the painful and lingering death of this young man many times and, of course, had formed my own hazy picture of him. To then come across the photograph above was a bittersweet shock. Thank you, Edie, for taking such good care of him.

If anyone is able to provide further information we would be glad to hear from you; please get in touch via the Visitor’s Book.