It is now exactly 100 years since Rifleman James Lennox died in Edie’s care at No. 1 General Hospital in Etretat on the Normandy Coast. Over a six week period Edie mentions him almost every day as he hangs onto life and it is one of the most poignant and heartbreaking accounts in her diaries.

Yesterday was a very busy day. Convoy in first thing. I had only 63 of yesterday’s convoy; two too ill to go on for a time. I fear one boy may not get better. He has pneumonia, caused by a lump of lead in his left lung. I suppose they will not be able to operate and he is so blue and bad – poor dear.

Lennox died soon after 8 o’clock last night.  Never have I seen such a slow painful death.  It was as if the boy was chained to Earth for punishment.  Towards the end it was agony for him to draw the little gasp breaths and I felt I must clap my hand over nose and mouth and quench the flickering flame.  I am very glad for the boy to be away.

You can read the complete, unedited text here; scroll down to 13 July. 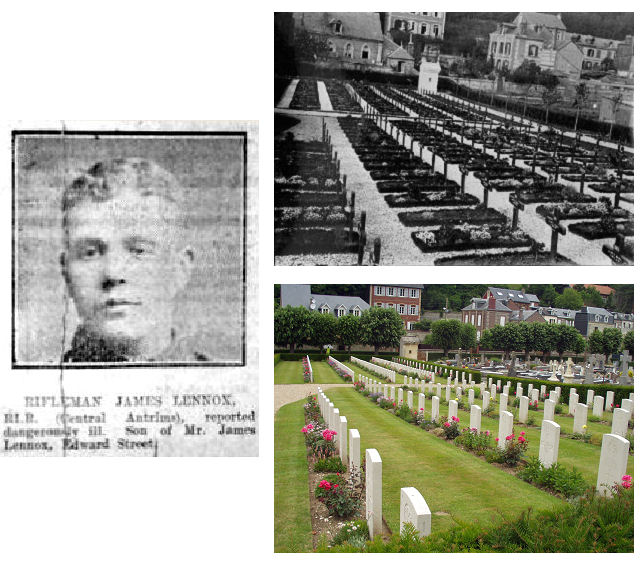 When I first published Edie’s diaries on her website – back in 2008 – a connection was made by Sue Light with Rifleman James Lennox, son of James and Sarah Lennox, of Edward St., Harryville, Ballymena, Northern Ireland. Read more here and here.

Once again my heartfelt thanks to Sue whose untimely death shocked us all so recently.

In 2014 I created this page for James Lennox. His grave is recorded on the CWGC website here.