Click here for a page which includes the tributes to Sue and the words of the celebrant at her funeral at Worthing Crematorium on 28 July 2016.

Sue Light, the person to whom I am most indebted in bringing my great aunt Edie’s diaries to public notice, died on 15 July 2016. Much too young to leave us.

I know that I am not alone in expressing shock and great sadness.  Sue, herself a retired army nurse, was so generous in sharing her extensive knowledge of British military nursing, particularly in the First World War.

The information she so painstakingly put together is available on her websites and here they are:

·         http://www.fairestforce.co.uk/ – information on all administrative and organisational aspects of the British military nursing services in France and Flanders during the Great War.

·         http://greatwarnurses.blogspot.co.uk/ – Sue’s blog includes all sorts of information, book extracts and informal comment about military nurses, particularly in relation to the Great War

·         https://twitter.com/scarletfinders – Sue’s Twitter page, begun in September 2010 is full of hundreds of links, retweets and  comments both informative and cheeky! A real treasure trove.

If you’d like to watch a talk by Sue, about the role of VADs, at the Thirty-first Annual General Meeting of The Western Front Association, 14 April 2012, at Mansfield College, Oxford, it’s on YouTube here.

On 24 June 2014, a mere six years (!) after first proposing it to English Heritage, Sue was present at the unveiling of a blue plaque in honour of Dame Maud McCarthy.  See Sue’s account on her blog here and my brief report on Edie’s website here. 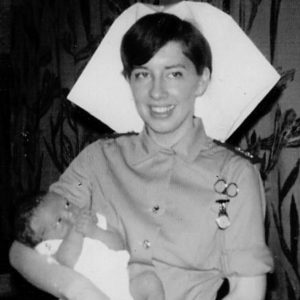 This is the image at the top of Sue’s twitter page and must be her as an army nurse. (More information needed). 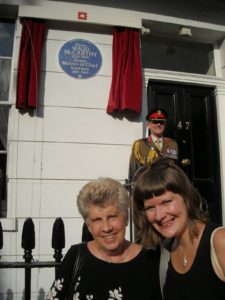