Edith Elizabeth Appleton was born on 9 June 1877 in Deal, Kent, 10th of 13 children. The family home for many years was 9 Golden Street (also known as Sea Valley House) in Deal and here is some information about the house.

Update 16 October 2014: Click here for a special page on the unveiling of a Deal Society plaque outside 9 Golden Street in honour of Edie.

First of all a very charming sketch and letter sent by Edie’s older brother, Percy, to his younger brother, Ted; it is dated 2 October 1879. Edie would have been two years old. Tragically, Percy died, aged 15, before the year was out.

Thanks to Ted’s daughter, Dorothy West, for providing the sketch and letter. 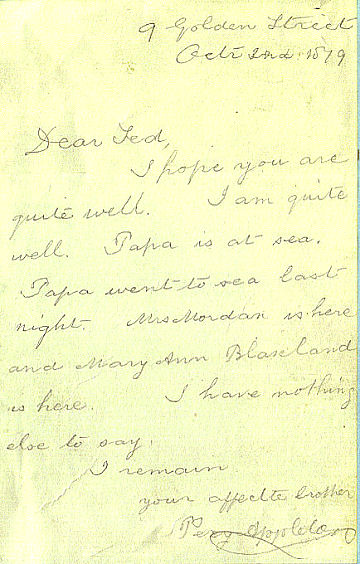 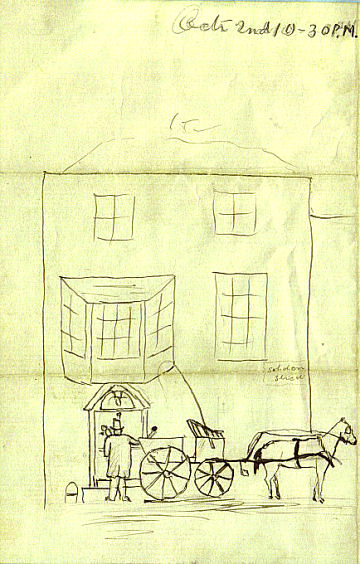 Here are some photos taken in June 2014 – thanks to Gillian Chiverton. 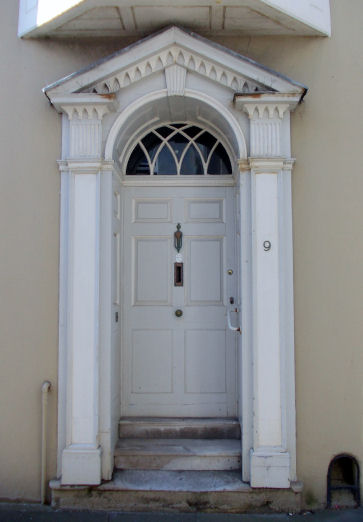 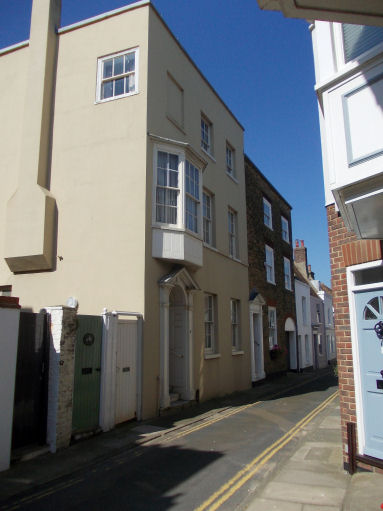 A sound that would have been familiar to all those Appleton children was that of the grandfather clock which came into the family, according to Edie’s younger brother, Sydney, from the Rowland branch; i.e. their mother’s family. The clock had a pretty tranquil existence, as far as we know, for its first 200 years. However, after it passed to Sydney Appleton in the 1920s and particularly since the 1930s it has travelled extensively – to say the least! See Sydney’s account below. 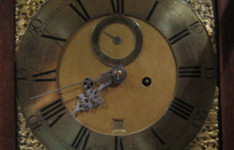 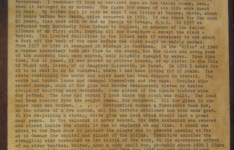 Here is Sydney’s account which he stuck to the back of the door 50 years ago. It is still there.

Information in Britten’s book suggests that this clock was built about 1720. It belonged to my maternal grandfather, John Meredith Rowland, who lived at Faversham. I remember it from my earliest days at Sea Valley House, Deal, when it belonged to my mother. The first 200 years of its life were spent in Kent. My mother left it with me when I was living at Bushey, Herts, about 10 years before her death which occurred in 1922. It was there for the next 10 years then went with me and my family to Tobago, B.W.I. In 1937 we returned very hurriedly from Tobago to England, on account of the sudden illness of my first wife, leaving all our furniture – except the clock – behind. The limited facilities in the Island made it necessary to cut about a foot off the back of the case before the clock could be safely packed. From 1937 to 1940 it remained in storage in Southsea. In the “Blitz” of 1940 a German incendiary bomb set fire to the store, but the clock was among some of the contents that were salved, only slightly damaged by water. From that time for 16 years, it was stored in private houses, of my sister in the Isle of Wight and, later, of my daughter Elizabeth, in Oxted. In 1956 I asked for it to be sent to Montreal, where I had been living for 12 years. The crate containing the works and upper case had been dropped in transit. The works had broken loose and damaged themselves and the case. Besides this recent damage, much of the glue had become desiccated; eleven or twelve strips of moulding were detached. Some pieces of the inside timbers were dry rotted. The door had shrunk ¼ inch since the clock was built. The lead had been removed from the weight cases, for shipment. All the glass in the upper case was broken. . . . Restoration seemed a formidable task but, in the course of a few months, all the defects mentioned were made good. In the re-joining a strong, white glue was used which should last a great many years. As the calendar is never needed, the date mechanism was removed and stored inside the clock; it can be replaced at any time. A check was added to the face door to protect the hinges and to prevent opening so far as to damage the capital and plinth of the pillar. Tradition ascribes the straggling star scratched on the middle of the door, to the mischevous effort of an older brother, Walter, when a very small boy, probably about 1880 ! (Care was taken not to remove this). On the 28th May 1957 the old clock ticked again for the first time in exactly 20 years and, after a few adjustments, resumed perfect time keeping.

Other notices have since been stuck to the back of the door and tell of the clock’s busy schedule between 1963 and the present day. It may seem like a bit too much information but, given the clock’s significance and great age, here’s a summary of its further travels: