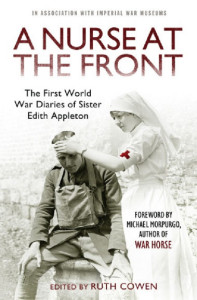 First published as a hardback and eBook on 1st March 2012 by Simon & Schuster with the Imperial War Museum. The paperback version was published on 7th February 2013.

Foreword by Michael Morpurgo (learn more about why here)

Edited by Ruth Cowen who has also written the Introduction

Comprehensive index of all names and places

Reviews of the book

“The Imperial War Museum is doing a grand job in publishing period diaries and this inspirational and gently moving account of a young nurse who served close to France’s Western Front in WWI presents a rare picture of nursing life, on and off duty.

Appleton cared for casualties of the first horrific gas attacks and the mass destruction of Ypres, blending compassion with practical skills, old-fashioned discipline with youthful spirits when away from work.

The slaughter of young men, their fears and final moments, is sensitively edited by historian Ruth Cowan in this reminder of all those who served in the ‘war to end all wars’.” (read the review on the Daily Mail website)

There are plenty of other reviews around.  A little light googling will reveal all.