We had such a wonderful time in Glasgow on 18-20 June. We came to give our Edie presentation at the centenary congress of the Royal College of Nursing (https://www.rcn.org.uk/) but we also had time to look around this amazing city.

The river Clyde does look sadly empty now that the ship-building has all but gone but the banks of that once busy and thriving river are slowly filling with some truly stunning modern buildings. Amongst those we saw were the ‘armadillo’, the ‘flying saucer’, the Science building (the “Edam” perhaps) and the Riverside Museum – all of which are of such inspiring and original design. Add those to many older buildings in the city and you could happily spend a week here exploring the architecture.

View from the Science Museum

We were particularly proud to have been asked tell Edie’s story at the RCN in its centenary year of existence. The congress was extremely impressively organised and run and we had the added bonus of listening to the main guest speaker, Nicola Sturgeon. With the NHS so under threat it was good to see so many passionate nurses cheering her many comments in support of that precious organisation.

The newly created centenary banner of the RCN

Our talk – “Remembering the Somme” – was so timely, too, coming just 11 days before the 100th anniversary of that terrible battle.  We opened our talk with a brief extract from Edie’s diaries, written exactly 100 years ago to the very day, in which she anticipates the forthcoming battle.

June 18th 1916. The air is vibrant with the awe and excitement of the great advance. The well men are being hurried back to duty and the others sent to England so, all along the lines, the hospitals – from base generals to clearing stations are prepared to receive and number of the poor fellows who must inevitably suffer.

Of course, the diary then goes on, over the following four months, to describe the full horrors of what ensued and how the medical services struggled to cope.  Here, for example, is Edie writing in early July.

4th July. Wounded. Hundreds upon hundreds on stretchers, being carried, walking – all covered from head to foot in well-caked mud. The rush and buzz of ambulances and motor buses is the only thing I can remember of yesterday outside my wards. Inside it took us longer than the whole day to anything line cope with the job of changing, feeding and dressing the wounds of our share of them. We had horribly bad wounds in numbers – some crawling with maggots, some tense and stinking with gangrene. One poor lad had both eyes shot through and there they were lying smashed and all mixed up with the eye lashes. He was quite calm and very tired. He said: “shall I need an operation, I can’t see anything?” Poor boy – he never will.

July 6th.  I give up description. In ordinary times we get a telegram from Abbeville saying a train with so many on board is coming. Then they stopped giving numbers; just said “full train”.  Now, not even a telegram comes, but the full trains do. I have 41 German prisoners amongst my lot.  The Surgeons are amputating limbs and boring through skulls at the rate of 30 a day and not a day passes without Death taking his toll.

July 9th.  Yesterday was a big scramble. 600 were evacuated from all parts of the hospital, chiefly to England. You have no idea Mother dear what it is like!  For me to be the person to answer everyone’s inquiries.  All dressings to be done. All patients to be fed and all got ready to go off or on a stretcher.

July 13th. Yesterday a very busy day. Convoy in first thing – sent one out in the afternoon – to be ready for the next rush. We had 5,000 men through this hospital last week.

So it goes on through August, September, October and November 1916. One million casualties on all sides of which more than 300,000 killed or missing. Day after day Edie’s diary records terrible descriptions of her wounded and dying patients. You can see all of Edie’s Somme-related entries on this page: http://anurseatthefront.org.uk/the-diaries-all-four-volumes/the-diaries-volume-3/.

Last year I was contacted by the historian Hugh Sebag-Montefiore whose new book, Somme – Into the Breach, is just out. He wanted to include extracts from the diaries; he wrote: “there is no nurse’s account better than Edith Appleton’s for the British sector during the Somme”.

Special thanks to Claire Chatterton and Teresa Doherty of the RCN History of Nursing Society (https://www.rcn.org.uk/centenary/history) for inviting us and looking after us so generously. 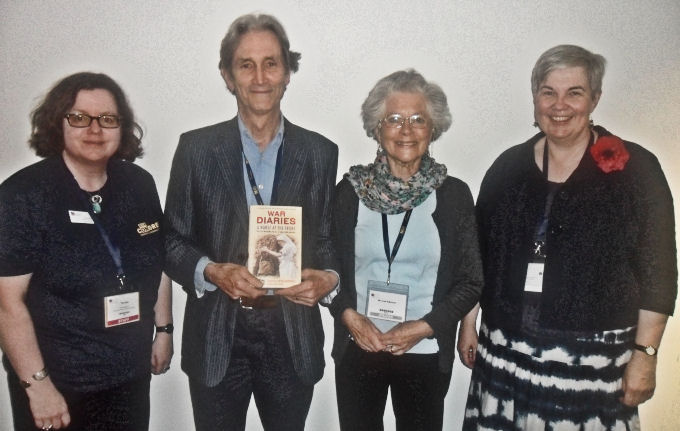 Next post: Edie and the Battle of the Somme