Lavinia Eliza Caroline STEEN was born in St. Petersburg, Russia, 20 January 1869, the daughter of a stockbroker. She trained as a nurse at Bristol General Hospital between 1891 and 1894, and was appointed to the Army Nursing Service in March 1897, transferring to Queen Alexandra’s Imperial Military Nursing Service in February 1903. She served in South Africa during the Boer war and was promoted to Matron in May 1910, the rank she held during the Great War.

She was awarded the Royal Red Cross, First Class, in June 1916, and a Bar to the award in March 1919. After being invalided home from France in March 1916 (this is mentioned in Edie’s dairy on 9 March 1916) she was granted sick leave, and later returned to work as the Matron of Reading War Hospital, Berkshire. She retired from the service on the grounds of ill-health in December 1922. She died in November 1942.

Update 29 December 2011:
We have now heard from Louise Ashby, a descendant of Matron Lavinia Steen, and she has sent this photograph. What a fine portrait it is. 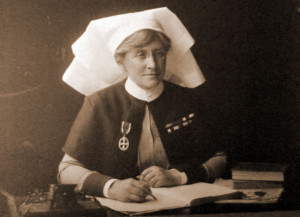 Louise writes: “She is wearing her QA medal, which I am proud to say is still in the family, along with her Royal Red Cross medal. Nina, as we knew her, and her brother Francis with whom my mother corresponded over many years, were her second cousins.”

The following is an extract from a letter to Molly Lucas (Louise’s mother) in Australia written on the 19th August, 1958 from Molly’s second cousin Francis Steen, living at the time in West Worthing, Sussex, England. Francis was a brother of Lavinia (Nina) Steen. Francis also served in the 1914-18 war.

“I am sending you a small gold chain with an Arabic seal on it. It was my sister Nina’s favourite piece of jewellery. But you will want to know its history! When matron at Cairo hospital, she opened the 1st military hospital in Khartoum, Sudan, but owing to the intense heat in summer, the hospital was closed, the patients being sent to Cairo for the summer. Once there were a few soldiers too ill to be moved, so Nina said she would stay and nurse them. Practically all the hospital was closed up, and Lady Wingate, wife of General Wingate, the Sirdar, insisted Nina stayed with them at the Palace as they had all facilities to combat the heat. She did so, and in leaving the next year, General Wingate gave her this chain and seal as a remembrance. The Palace was the one on whose steps General Gordon was killed. The Arabic seal means “May Allah protect you”. The seal is quite small but rather dainty work, and I shall feel very happy to know it is in your keeping.”

Sirdar – a variant of Sardar, a long-standing of Indo-Aryan rank – was assigned to the British Commander-in-Chief of the nineteenth century Egyptian Army.